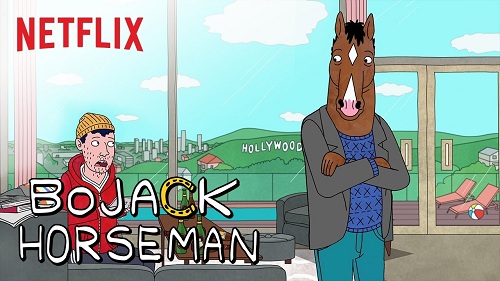 The series was first released on Netflix on 22 August 2014 and contains a total of 77 episodes, with a time frame of 25-30 minutes each. The series comes to an end with season 6 and to the viewer’s disappointment, there will be no BoJack Horseman seventh season.

The TV series is an adult animated, comedy-drama series that has American origins.

The TV series is about a horse who once was a famous television actor of a sitcom series that was aired a couple of decades ago and now, is dealing with depression, and is desperately seeking to revive his career through an autobiography that is to be written by a ghost-writer.

The show reminds one of a grumpy old grandfather, who goes out and starts laying harshness to the world, when not drunk. The series takes place in Hollywood where animals live alongside humans, and also focuses on characters that revolve around the protagonist of the series BoJack. This series has been given an IMDB rating of 8.7/10.

The series is 18+ rated, containing strong content, language, drug use and is recommended for ages 18 and above.